My IP was down all frickin day so I didn't post my normal stuff today.
Posted by The Man at 5/20/2008 No comments: 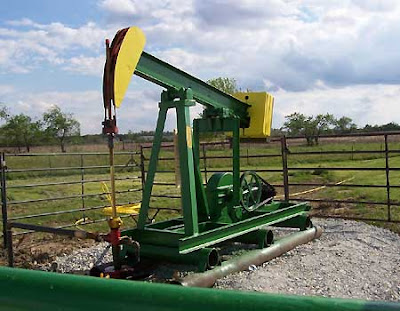 Indiana Man Operates Oil Well in Backyard, Producing Three Barrels of Crude a Day
SELMA, Ind. — It's just a drop in the global oil bucket, but an eastern Indiana man is operating an oil well in his backyard in an effort to capitalize on soaring crude prices.
Greg Losh's rig produces three barrels of crude oil a day, he hasn't started selling it yet. For now, he and his partners are keeping it in storage containers.
He declined to say how much oil they've collected in the two weeks they've been pumping.
But as oil is going for about $127 a barrel on the international market, three daily would yield just under $400 a day for Losh on the global spot market — or 1/100,000 of the daily production increase the Saudis agreed to earlier this month.
Still, in spite of those returns and the $100,000 it costs to drill a well, it's worth it to Losh considering the current price of oil. The oil his well produces comes from the Trenton field that fueled the growth of east-central Indiana cities more than a century ago.
He expects to drill four more wells soon on his property in the town of Selma about 55 miles northeast of Indianapolis.
Posted by The Man at 5/20/2008 No comments:

.
CELESTEJOHNSON said...
Three letter animal - Alligator?
Summer time - Snow?? LOL
I needed a good laugh! Thanks for making my day!!
The sad thing is that their spawn is walking around somewhere, and have a vote in this upcoming election! SCARY thought!
Posted by The Man at 5/20/2008 1 comment:

Mexican "Jackass" jailed for ornery behavior
TUXTLA GUTIERREZ, Mexico (AP) — A donkey is doing time in southern Mexico for assault and battery. The animal was locked up at a local jail that normally holds people for public drunkenness and other disturbances after it bit and kicked two men near a ranch in Chiapas state, police said Monday. Officer Sinar Gomez said the donkey will remain behind bars until its owner agrees to pay the men's medical bills.
"Around here, if someone commits a crime they are jailed," Gomez said — "no matter who they are." The owner, Mauro Gutierrez, said he would try to reach a friendly arrangement to pay the men's bills, estimated at US$420
.
"Raging Bull" did major damage to a family home
BERLIN - A German family were stunned when a rampaging bull burst through the back door of their house, charged around the living room, and then left by the front door.
"The animal basically did a tour of the hall, the kitchen and the living room before leaving the building," said Paul Kemen, a spokesman for police in the western city of Aachen on Monday. "It came in the back and went out the front."
None in the family were injured, but the bull caused an estimated 10,000 euros ($15,600) of damage, police said. The bull left after the owner of the house opened the front door for it.
Posted by The Man at 5/20/2008 No comments: