Mother Faces Charges for Cursing at Principal
A New Jersey woman went to court Wednesday for a disorderly conduct charge after she cursed out a middle school principal.
Cindy Schwalb says a boy pulled down her 13-year-old daughter's sweatpants in front of other students at Hasbrouck Heights Middle School.
Schwalb says she went to a school board seminar about bullying and got upset when her daughter's case wasn't given the attention she felt it deserved.
Schwalb says she became enraged when the district superintendent starting asking her questions, including one about whether her daughter was wearing a thong.
Superintendent Joseph Luongo says it was a fair question, "I had to find out what body parts were actually revealed."
.
Bar masturbator caught Vaseline-handed
Accused of repeatedly exposing himself at a SeaTac bar, a 41-year-old man has been charged with indecent exposure with sexual motivation
King County prosecutors claim in charging documents, Basim Salim Abdul-Rahim was seated in the bar of the 13 Coins restaurant when a bartender there noticed he was staring at her. The woman became concerned when she realized Abdul-Rahim was fondling himself.
Abdul-Rahim fled before police arrived, a King County detective said in court documents, leaving behind a container of Vaseline.
Two days later he allegedly returned to the restaurant, prompting the bartender to call the police to report that a man who'd repeatedly exposed himself was sitting at the bar, according to court documents. Deputies arrested Abdul-Rahim, finding his hands coated with petroleum jelly.
Confronted by police, Abdul-Rahim allegedly admitted to frequenting the bar but denied following the bartender, according to prosecutors' statements.
Questioned about his Vaseline-covered hands, he said he'd been having phone sex with his wife, prosecutors alleged. She denied the claim but offered that her husband had previously been convicted on similar charges in Clallam County.
.
Posted by The Man at 1/14/2010 No comments: 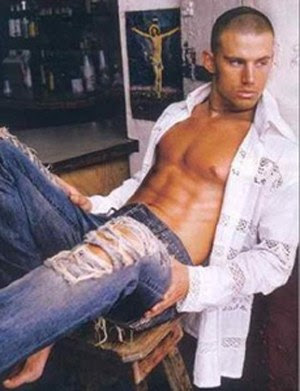 Channing Tatum has told of the "suffocating" pain he endured when his penis was scalded by boiling water on the set of his latest film.
The G.I. Joe: The Rise of Cobra star told Details magazine that he was rushed to hospital with severe burns to his privates after the on-set mishap.
Boiling water was accidentally poured down Tatum's wetsuit to stop him from getting hypothermia while shooting The Eagle of The Ninth in the freezing waters off Scotland.
Stagehands reportedly forgot to dilute the boiling water, straight from the kettle, with cold water.
The 29-year-old told Details it was "the most painful thing I have ever experienced in my life".
"I was trying to pull the suit away from my body to somehow get away from the boiling water, and the more I pulled the suit away, the lower the water went. It just went straight down," he said.
"I've been to the hospital, gotten stitches, had broken fingers and toes. But this was a suffocating kind of pain."
Tatum reportedly told his driver he may have to be knocked unconscious because the pain was so unbearable.
After reaching the hospital - an hour away - a team of doctors salvaged and bandaged the wound.
"I had five guys looking at my shriveled, burned penis," Tatum said of his hospital visit.
For anyone wondering how the recovery went, Tatum was happy to report he is fully recovered.
"I'm good . . . now," he said.
"Now my penis is fantastic! One hundred percent recovered. Put me back in the game, Coach."
.
Posted by The Man at 1/14/2010 No comments: 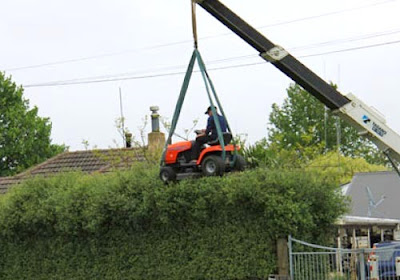 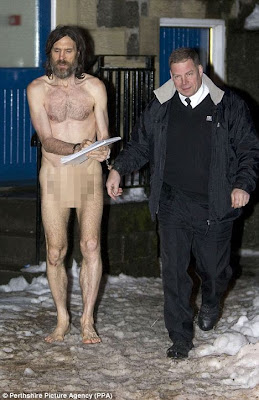 The naked rambler, Stephen Gough, has been told he will spend the rest of his life behind bars if he continues refusing to wear clothes in public.
The former Royal Marine, who became notorious for his naked hike from Land's End to John O'Groats in 2003, has spent much of the past seven years in prison for repeatedly appearing nude in public.
He was yesterday found guilty of breaching the peace when he walked naked from Perth prison in December after finishing a 12 month sentence for the same offence. Mr. Gough was warned he will continue to be jailed every time he steps out of prison without any clothes on.
The 50-year-old, who conducted his own defense while appearing in court completely naked, turned down an offer to walk free yesterday on the condition that he got dressed.
.
Posted by The Man at 1/14/2010 No comments: