Wii Pii
What will they think of next? 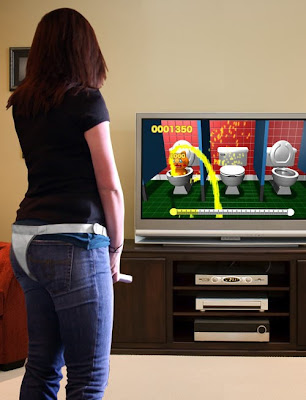 You To Can Flaunt Your Riches! 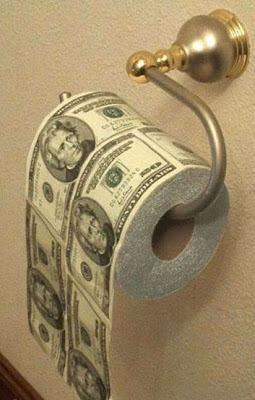 Tired of all the Richie Richs flaunting their riches? Well, it’s about time you showed them a thing or two. If only you could wipe your bottom with enough greenbacks to make them jealous. Here’s a way out. A designer toilet paper printed in the form of money. Yeah, wipe in style with the Million Dollar Toilet Paper and feel good about yourself. Wipe your tushie with this toilet paper everyday and you’ll never have a reason to feel low about yourself again. 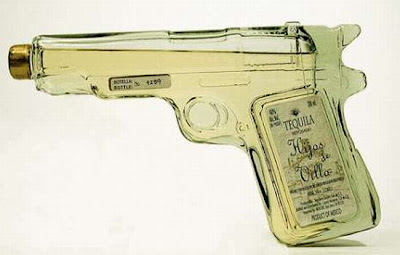 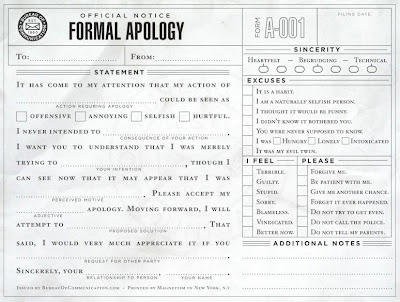 Car climbing a slope with engine off

Car Climbing A Slope With Engines Off?
.
A gravity hill, also known as a magnetic hill (and sometimes a mystery hill or a gravity road), is a place where the layout of the surrounding land produces the optical illusion that a very slight downhill slope appears to be an uphill slope. Thus, a car left out of gear will appear to be rolling uphill. There are hundreds of known gravity hill locations around the world.
Posted by The Man at 5/18/2008 No comments:

That takes balls…and absolutely no brains
Posted by The Man at 5/18/2008 No comments:

Motorists were left confused when council workers erected two signs with different speed limits at the entrance to a road. One sign in residential Stratton Road, Chorlton, Manchester,
read 30mph but the other read 20mph.
Resident Harold Lantsberry said: "It's quite ridiculous and I wondered at first whether it's some kind of joke. "I don't know which speed the council is going to try and enforce."
Manchester City Council has admitted that a mistake was made installing the signs, which were intended to reduce the speed limit in the road from 30mph to 20mph.
Posted by The Man at 5/18/2008 No comments:

Fat people blamed for global warming
British scientists say they use up more fuel to transport them around and the amount of food they eat requires more energy to produce than that consumed by those on smaller diets.
According to a team at the London School Mr Edwards and his colleague Ian Roberts argue that because thinner people eat less and are more likely to walk than rely on cars, a slimmer population would lower demand for fuel and food.
Because 20 percent of greenhouse gas stems from agriculture any reduction in food consumption would help cut emissions.
Edwards and Roberts found that obese people need 1,680 daily calories to sustain normal energy and another 1,280 calories to maintain daily activities, 18 percent more than someone with a healthy body mass index.
At least 400 million adults worldwide are obese. The World Health Organization (WHO) projects by 2015, 2.3 billion adults will be overweight and more than 700 million will be obese.
.
Egypt con man gets 1,000 years
An Egyptian man has been sentenced to 1,000 years in prison for defrauding hundreds of people out of about $52m.
Abdullah Kamel Mohammed tricked people into giving him money which he promised to invest and split the profits with them. Mohammed would then disappear.
He is believed to have tricked about 500 people out of their savings, starting in the early 1980s.
Members of his family have appeared on TV blaming the victims for being naive enough to hand him their money.
As an unemployed man, his family argue, Mohammed was merely trying to make a living.
.
Police say men trying to steal power lines shocked
CONFLUENCE, Pa. - Two Somerset County men are charged with trying to steal live power lines that were still attached to a transformer and utility poles.
Police said Kevin Lee Lytle, 27, and Daniel Jay Basinger, 24, both of Confluence, were shocked during the theft attempt on May 3 in Lower Turkeyfoot Township.
Both were charged Wednesday, but only Basinger was well enough to attend his arraignment on the attempted theft charge.
Police say the incident disrupted power to area residences for about five hours. Penelec Power Co. owns the lines which suffered $1,500 damage.
Posted by The Man at 5/18/2008 No comments: