Doctor arrested in a fatal hit-and-run

Investigators arrested a doctor, Mohammad Sarrafizadeh, on suspicion of failing to stop at an injury accident in which a 32-year-old man was killed.
Police say Sarrafizadeh, arrested at his home according to jail records released early this morning, drove for approximately three miles with the man's body on top of his van after crashing into him.
. 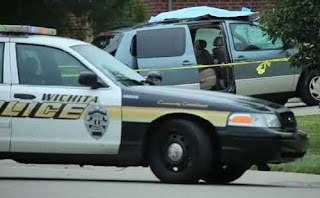 .
Almira Hammond, who lives across the street from the house in where the minivan and the body ended up in a driveway, said of herself and her neighbors, "We're all stunned."
It's hard to understand how it happened, said.
watched as workers tended to the victim's body atop the minivan. The 32-year-old man was pronounced dead at the scene. Police didn't release the man's name.
The victim had been working near the street when the minivan struck him
﻿.
Posted by The Man at 6/13/2011 No comments:

A homeowner was having a giant hot tub placed in his backyard. They weren't able to go around the house with it, so a company with a crane helped place it over the house. The crane toppled right on top of the roof over the garage.
. 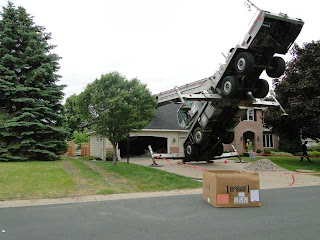 .
The Ramsey County Sheriff's Department says they were told a computer malfunction caused the crane to topple Friday. No one was hurt.
.