Boy Pushed 10-Year-Old Girl From Bridge, Killing Her for iPod
A 14-year-old school boy in eastern India has been arrested on suspicion of murdering a younger student who refused to give him her iPod, police said Tuesday.
The boy allegedly pushed the 10-year-old girl off a 30-foot bridge then climbed down and strangled her unconscious body on Monday, said Swapan Banerjee, the officer in charge of the local police station in Seuri, a town in West Bengal state.
"It was a murder with intention. He murdered her in anger because she refused to part with the gadget," Banerjee said.
.
Man says he grew pot in a cost-saving move
A Tyler man accused of growing marijuana in an alleged cost-saving move is jailed on felony possession charges. Bond is $15,000 for 55-year-old John Daniel Miller III, who remained in the Smith County Jail late Tuesday.
Sheriff's Sgt. Randy Meadows told the Tyler Morning-Telegraph that a tip led officers to some rural property, where several marijuana plants — encircled by old tires — lined the driveway.
Deputies confiscated more than 70 plants worth about $100,000.
Meadows said Miller told deputies he knew they were coming "sooner or later" and he was cultivating his own marijuana because the cost of buying the illegal substance had gone up.
.
Cell phone photo foils man in Pizza Hut plot
A man accused of trying to extort $500 from a Pizza Hut in Elko was foiled by his own cell phone camera. Police said a former employee of the restaurant allegedly called the manager on Friday and told him he had five Pizza Hut signs that are used on the roofs of vehicles and wouldn't return them unless he was paid $500.
Police said the manager wanted proof that Long had the signs. So the 23-year-old man sent him a cell phone picture that proved to be his undoing.
Officers were able to zoom in on license plate numbers of two vehicles in the background that are registered to the man.
He's been charged with extortion, possession of stolen property and grand larceny. Bail is set at $15,000.
.
Intoxicated man gives officer a beer instead of driver's license
A 20-year-old Niceville man was arrested for driving while intoxicated after he was found asleep at the wheel by the side of the road. The man was discovered in his car at about 5 a.m. Saturday morning by a Niceville Police officer, according to his arrest report.
When the officer woke him up and asked him where he was, the man answered that he was in Destin, although he was actually on College Boulevard in Niceville.
When asked to produce his driver's license, he handed the officer two different pairs of sunglasses and an empty box of condoms. Then, he gave the officer a half-full cold Fosters beer from the center console, telling him that he'd opened it earlier but hadn't drunk much of it.
The man was wearing a bar band and said he'd had "a few" drinks.
.
Mourners Shocked to Discover 'Dead Man' Was Just on Vacation
A British man who did not tell anyone he was going on vacation to Australia came home to find they were mourning his death.
The confusion began in June, when 49-year-old Michael O'Neill, from Middlesbrough, England, made a last-minute decision to head Down Under without telling a soul.
His neighbors grew worried and called police, who broke into his flat and found no evidence of his whereabouts.
The situation grew even worse last week when his friends saw a death notice in a local newspaper. By an incredible coincidence, another Michael O'Neill from Middlesbrough had died — and both have brothers named Kevin and Terry.
.
Posted by The Man at 8/20/2008 No comments: 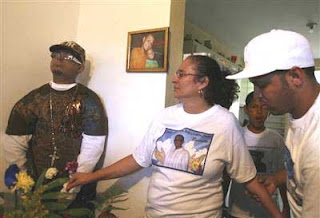 A Puerto Rican man has been granted his wish to remain standing — even in death. A funeral home used a special embalming treatment to keep the corpse of 24-year-old Angel Pantoja Medina standing upright for his three-day wake. Dressed in a Yankees baseball cap and sunglasses, Pantoja was mourned by relatives while propped upright in his mother's living room.
His brother Carlos said the victim had long said he wanted to be upright for his own wake: "He wanted to be happy, standing." The owner of the Marin Funeral Home, Damaris Marin, said the mother asked him to fulfill her dead son's last wish.
.
What a stand up guy!
Posted by The Man at 8/20/2008 No comments: 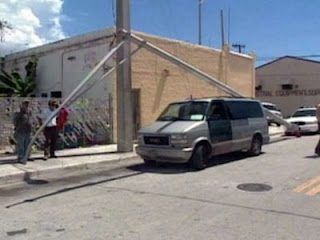 Last week, a man in Miami, FL was arrested for stealing an unusual item: a 40-foot street light that was owned by the Florida Department of Transportation.
Elio Valero, 42, said that the light pole was laying next to the road. So, of course, he strapped it to the roof of his mini-van, tied red flags on each end of it and drove it 40 blocks to a recycling plant.
Unfortunately for Elio, a minivan driving down the road with a 40-foot long light pole attached to the roof is not very inconspicuous. The police pulled Elio over just a few feet in front of the recycling station... and placed him under arrest for grand theft. Elio defended his actions by saying, "Hey, if I'm doing this to recycle, everybody else should do what they #&@% need to." Interestingly, while the police were outside the recycling plant placing Elio under arrest, another man, Joseph Moniz, was caught wandering into the plant trying to sell a manhole cover. He was also arrested.
Posted by The Man at 8/20/2008 No comments: