I have 4 kids by 3 different men 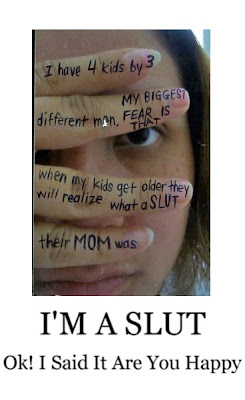 Politician Who Peed on Crowd Swears Off Booze (Yeah Right)
The New Jersey councilman Steve Lipski who urinated on a crowd of concertgoers from the balcony of a Washington, D.C. nightclub swore off booze on Sunday -- two days after he was busted for the embarrassing stunt.
The 44-year-old Democratic councilman refused to admit to the lewd stunt.
Lipski was in D.C. to see a Grateful Dead tribute band and was spotted relieving himself by one of the club's staffers around 9:50 p.m., He was charged with simple assault.
Messages left at Lipski's council office, and a Jersey City listing under his name were not immediately returned.
.
Doctor Gets Beat Up, Hospital Trashed After Patient Dies
At least 30 people in West Bengal, India, beat up a doctor and ransacked a hospital after a patient died, the Calcutta News reported.
The attackers alleged that 52-year-old Kajem Sheikh died because of Dr. Santanu Mondal’s negligence, a senior police officer from the Nabagram police station told the newspaper.
Sheikh was admitted to a hospital in the Nabagram village of the Murshidabad district Sunday night with severe stomach pains.
"Since it was Sunday, after hurriedly examining Kajem, Mondal scribbled a prescription and left for his quarters, which were on hospital premises," the police officer said. "Around 8:30 p.m., Kajem’s stomach started to swell. But when his relatives called for the doctor, Mondal refused to come, saying it was not his duty hours."
Sheikh was then transferred to nearby Beharampur General Hospital, but he died on his way there. That is when friends and relatives of the man broke into Mondal’s house and attacked him. They later ransacked the hospital.
.
Cops had a tough time finding sober driver for 1-year-old
Indiana state police said that after a mother was arrested for drunken driving, the three relatives who came to pick up her 1-year-old son also had all been drinking. A state trooper stopped a minivan for speeding early Saturday on U.S. 30 in Schererville in northwestern Indiana. He arrested the 24-year-old woman on a drunken driving charges.
The boy's father arrived later to pick him up, but officers determined he was intoxicated and also arrested him on a drunken driving charge.
Police said the boy's grandparents then arrived. Both of them also had been drinking, state police said, but the grandmother who was driving was not over the legal limit, so officers escorted them home with the child.
.
Charity worker finds $7,500 among donated shoes
This stacks up among the better finds at a Goodwill store: $7,500 in cash stuffed in a shoebox. A recent Bulgarian immigrant found the money during her first day on the job last week at a Goodwill near St. Louis in Glen Carbon, Ill.
Teodora Petrova didn't hesitate after finding the cash with a pair of donated shoes - she turned the money over to a manager who told executives for the nonprofit charity.
The president and chief executive of the area's Goodwill organization says it's eager to find the owner of the money. The charity figures it may have been left with the shoes accidentally.
If the owner isn't found, Goodwill says the money will go toward the charity's job-placement efforts.
.
Cheaters were caught having sex in a car park as other people watched.
But Gillian Stalker and John McDougall denied "dogging" and insisted: "We just got carried away."
Stalker and McDougall, both married to other partners, had sex in a car at Irvine beach in Ayrshire then carried on the romp on the ground in the car park.
But she denied police claims that the area was busy with dog walkers and children and said neither she nor McDougall would normally have sex in public.
She said they were responsible people and "not that way inclined".
Sentence was deferred.
Speaking later at home in Irvine, McDougall, who appeared to have suffered an injury near his eye, said: "I'm really sorry it happened but I don't want to talk about it. My wife knows about it." Stalker refused to comment at her home in nearby Ardrossan.
.
FLORIDA NEWS
.
$4,000 worth of shoes go walking
Not long ago, we blogged about dozens of stolen bras.
Now we've got pilfered shoes.
And shirts.
Cops say thieves made off with $4,000 worth of shoes from an Estero outlet store,
Then another group grabbed $500 worth of shirts.
Three men entered the store, each carrying bags detectives later learned are sometimes used to deflect security sensors.
Then without attracting attention, the men loaded up approximately 40 pair of shoes - Remix and Turbo and Vivify -into the bags and marched out the front doors unnoticed.
Eventually, they're gonna steal their way through an entire wardrobe.
.
Woman sues fortune teller for $13,200
A Naples Florida woman has filed suit in small claims court to recover $13,200 she paid to a fortune teller.
Eumanthe Dufrene, 54, charges Doris Palm & Card Reading advertised a money-back guarantee but failed to return the money she paid for "spiritual loans" to combat evil.
Tiffany Johnson, co-owner of the business, says Dufrene paid the money for readings after asking that a curse be placed on a man who killed her son.
Johnson says she told Dufrene they don't do that kind of work and suggested she go to Haiti if she wanted a curse.
Dufrene's suit will be decided by a Collier County judge.
Published reports indicate only a handful of fortune tellers have been sued by dissatisfied customers.
.
Deputy suspended for using Taser to wake inmate
A Florida Pinellas County detention deputy was suspended for using the sound of his stun gun to try and wake up an inmate. According to an internal affairs report, the deputy thought the crackling sound of his Taser would rouse an inmate on July 27. It did not.
The inmate had fallen asleep at on the floor of the jail's intake section.
The deputy, a three-year veteran, received a 15-day suspension. His punishment also includes a charge of misconduct for falsifying a report.
.
Posted by The Man at 11/11/2008 No comments:

A WOMAN'S PERSPECTIVE
The other night I was invited out for a night with the ‘girls.’ I told my husband that I would be home by midnight, ‘I promise!’
Well, the hours passed and the margarita’s went down way too easily. Around 3 a.m., a bit loaded, I headed for home. Just as I got in the door, the cuckoo clock in the hallway started up and cuckooed 3 times. Quickly, realizing my husband would probably wake up, I cuckooed another 9 times.
I was really proud of myself for coming up with such a quick-witted solution, in order to escape a possible conflict with him. (Even when totally smashed… 3 cuckoos plus 9 cuckoos totals = 12 cuckoos MIDNIGHT!)
The next morning my husband asked me what time I got in, I told him ‘MIDNIGHT’… he didn’t seem pissed off in the least………. Whew, I got away with that one!
Then he said ‘We need a new cuckoo clock.’ When I asked him why, he said, ‘Well, last night our clock cuckooed three times then said ‘oh shit.’ Cuckooed 4 more times, cleared its throat, cuckooed another three times, giggled, cuckooed twice more, and then tripped over the coffee table and farted.
.
A MAN'S PERSPECTIVE
A man wakes up at home with a huge hangover. He forces himself to open his eyes, and the first thing he sees is a couple of aspirins and a glass of water on the side table.He sits down and sees his clothing in front of him, all clean and pressed. He looks around the room and sees that it is in perfect order, spotless, clean. So is the rest of the house. He takes the aspirins and notices a note on the table."Honey, breakfast is on the stove, I left early to go shopping. Love you!"So he goes to the kitchen and sure enough there is a hot breakfast and the morning newspaper. His son is also at the table, eating. The man asks, "Son, what happened last night?"His son says, "Well, you came home around 3 AM, drunk and delirious. Broke some furniture, puked in the hallway, and gave yourself a black eye when you stumbled into the door."Confused, the man asks, "So, why is everything in order and so clean, and breakfast is on the table waiting for me?"His son replies, "Oh, that! Mom dragged you to the bedroom, and when she tried to take your pants off, you said, 'Lady leave me alone! I'm married!' "
Posted by The Man at 11/11/2008 No comments: 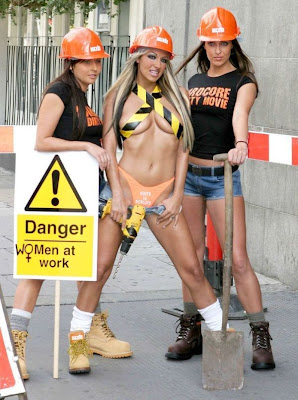