Chester and Earl are going hunting.
Chester says to Earl, "I’ll send my dog out to see if there are any ducks out in the pond. If there aren’t any ducks out there, I’m not going hunting."
So he sends the dog out to the pond. The dog comes back and barks twice. Chester says, "Well I’m not going to go out. He only saw two ducks out there."
Earl says, "You’re going to take the dog’s barks for the truth?" Earl doesn’t believe it, so he goes to look for himself. When he gets back he says, "I don’t believe it where did you get that dog? There really are only two ducks out there!"
Chester says, "Well, I got him from the breeder up the road. If you want, you can get one from him, too."
So Earl goes to the breeder and says he wants a dog like the one his friend Chester has. The breeder obliges and Earl brings the dog home, tells it to go out and look for ducks. Minutes later the dog returns with a stick in it’s mouth and starts humping Earl’s leg.
Outraged, Earl takes the dog back to the breeder and says, "This dog is a fraud. I want my money back!"
The breeder asks Earl what the dog did. So Earl tells him that when he sent the dog out to look for ducks, it came back with a stick in its mouth and started humping his leg.
The breeder says, "Earl, all he was trying to tell you was that there are more fucking ducks out there than you can shake a stick at!
.
.
.
From
Posted by The Man at 6/15/2008 No comments:

Dog Swept Up, And Killed By NYC Street Sweeper 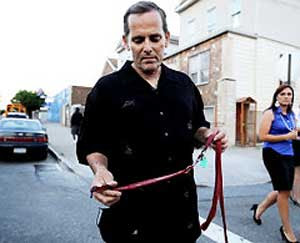 A Bronx man is devastated after his dog was swept up and killed by a city street sweeper Thursday morning. The incident occurred at Randall and St. Lawrence avenues in the Soundview section of the borough. Witnesses say the sweeper came speeding down the street, swerving to avoid a speed bump, before yanking the dog, a Boston Terrier named Ginger, right out of her leash. 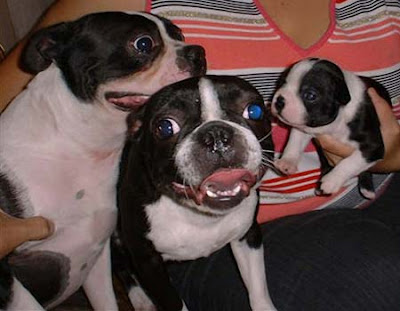 "We couldn't believe that man could be driving that fast and sweep up the little dog like he was a piece of garbage or something, and then don't even say 'I'm sorry.' 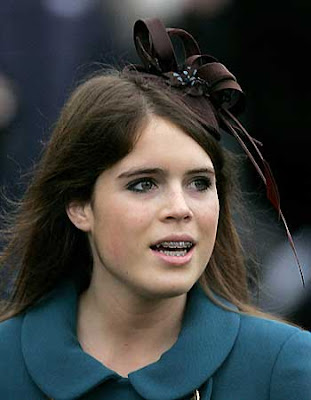 Britain’s Princess Eugenie was found naked on the grounds of her school during a drunken night with pals.
The Duke and Duchess of York’s younger daughter and classmates "frolicked like nymphs" on the lawns.
Eugenie, 18, was given a severe scolding and told not to stay at school on weekends. She has been a $44,700-a-year boarder at Marlborough College, Wilts, for five years.
A senior staff member was woken by playful shrieks and discovered about a dozen pupils dancing around in their birthday suits under the midnight moonlight.
"It’s the talk of the college," one pupil said. "The girls had been drinking, possibly in a local pub, and decided to let their hair down."
"It was a couple of weeks ago just before people started taking their A-levels and some find exams all a bit stressful. For some reason they stripped off and started prancing about."
There is no suggestion any boys were present or that drugs were involved.
Eugenie, who is sixth in line to the throne, is expected to appear at Royal Ascot for the first time next week with sister Beatrice, 19.
A spokeswoman for the Duchess of York declined to comment.
.
Joanne Casey said...
She takes after her ma!
Posted by The Man at 6/15/2008 1 comment:

Chicago police officers lose case and $7.7 million for false arrest
CHICAGO — A nurse who helped a Chicago police officer from a wrecked squad car and was later accused of stealing a weapon has been awarded $7.7 million by a federal jury for false arrest.
In November 2002, a car ran a stop sign in Rachelle Jackson's neighborhood, slamming into a squad car. According to her attorney, Jackson, who was walking nearby, found the officer behind the wheel unconscious and the passenger, Officer Kelly Brogan, dazed.
She pulled Brogan from the wreckage. Soon after, police approached Jackson and told her that the driver's weapon had been stolen.
Jackson was accused of the theft. She was charged and spent more than 10 months in the Cook County Jail awaiting trial. Her case was later thrown out by a judge and Jackson sued the city of Chicago.
Defense attorney Andrew Hale said the amount the jury awarded Jackson was "excessive."
Click here to read more on this story from The Chicago Tribune.
.
Man wore a diaper full of heroin
Frank Keys Jr. faces up to 40 years in prison after he was found cruising down the highway with more than 200 grams of heroin in the diaper he was wearing, federal officials said.
Keys, 38, of New Orleans was charged Friday by a federal grand jury. He got in trouble June 3 in St. John the Baptist Parish, north of New Orleans, when sheriff's deputies pulled over the car he was in for a traffic violation, according to court documents.
The deputies and Drug Enforcement Agency special agents got permission to search the car, and a drug sniffing dog alerted them to the car's passenger side.
The occupants were ordered out of the car, and patted down. During the pat-down, "officers felt a large hard object in the pants area on Keys," according to a news release from the U.S. Attorney's office.
Keys told officers he was wearing a diaper and when they asked if there was anything in the diaper, he "shook his head affirmatively."
Officers then removed a package containing about 257 grams of heroin from the diaper.
.
Man gets 3 years in prison for stealing 840 frozen pizzas
HAMILTON — Steven Proffitt, 47, pleaded guilty last week to breaking and entering spanning three years. He cut locks off refrigerated trucks at Kraft Foods in Monroe and loaded hundreds of pies into his pickup truck.
On July 5, 2006, 240 frozen pies were stolen. Another 240 were taken Feb. 9, 2007. On Feb. 16, 252 were stolen and on March 21, he loaded 108 DiGiorno rising crust pizzas into his Chevy S-10, according to court records.
Monroe police were alerted about a theft in progress the night of March 21. Proffitt, in his truck loaded with pizzas, sped past officers, eventually crashing into a fence. He managed to eluded them, leaving behind the truck, pizzas, chain cutters and tools.
Two days later, he reported his truck stolen to the Butler County Sheriff's Office. Police arrested him a few days later at a residence in New Miami.
"We have him and his truck on tape," county assistant prosecutor Jason Phillabaum said.
.
Robbers Fleeing Police End Up In Freezer
East Price Hill, Ohio -- A pair of robbers in Ohio on Friday discovered it's best to know the layout of the place you're robbing.
Police said the two men entered a Domino's Pizza and demanded money.
A witness saw what was happening and flagged down two police officers from a district headquarters -- which was just down the block.
When police arrived, they said Marcus Brewster, 21, and a 16-year-old boy tried to run out of the store. Instead, police said, they ran into a freezer, where they were arrested moments later.
.
Mysterious 'Gas Men' dole out cash at the pumps
Plainville, Conn. They don't climb tall buildings in a single bound, but the mysterious "Gas Men" are super heroes to some fed-up motorists. The unknown duo were dressed in sunglasses, baseball caps, khakis and matching green golf shirts when they gave Gayle Kilburn a $100 bill on Thursday as she filled up her car at a Citgo in Plainville.
They also handed her a card that read "Re-Fueling Our Community" and was signed "The Gas Men."
Kilburn says she was stunned by the gesture and at first thought it was a stunt with Monopoly money. She later realized it was real cash and used it to fill her tank.
She said the Gas Men also helped five or six other customers.
Posted by The Man at 6/15/2008 No comments: