Let me show you where the needles are
A 32-year-old man was arrested on charges of drug and drug paraphernalia possession.
Phillip Todd Tucker of Niceville was pulled over for not wearing his seatbelt, but was suspected of drug possession, according to an Okaloosa County Sheriff’s report.
When he was pulled over he stated, “I can’t believe you are going to get me with a seat belt violation.”
A K-9 unit was brought in and identified that drugs were in Tucker’s vehicle.
During a search, Tucker told deputies, “Let me show you where the needles are, I don’t want anyone getting stuck.”
He identified a black backpack, which held marijuana, four pills and 28 syringes.
.
: Where streets have no name
Police are investigating the mysterious disappearance of about 100 street signs.
The signs first starting vanishing from Northborough street corners about six months ago.
It's an expensive problem. Public Works Director Kara Buzanoski says the cost of replacing them is about $15,000.
Buzanoski and police Chief Mark Leahy suspect teenage pranksters, but so far there have been no arrests.
The town had a similar problem a few years ago when several teens were apparently involved in a contest to see how many signs they could purloin. When police started closing in on those culprits, the signs started reappearing. Leahy says this time the thieves will be prosecuted.
The town will replace the stolen signs. Buzanoski says the new ones are more vandal-resistant.
.
Man gets hit by SUV over computer repair bill
A dispute over a computer repair bill landed an Office Depot manager in the hospital and an angry customer behind bars, according to the Palm Beach County Sheriff's Office,
John Derrico, 40, is accused of hitting manager Andre Kinchen, 36, with his SUV outside store over a $120 computer repair bill.
Kinchen flipped over the hood of the vehicle and landed on the curb head first, employee Kaylee Whitten said.
During questioning, Derrico said "he does not remember what happened but got mad," according to a Sheriff's Office deputy quoted in the report.
.
Goodwill got marijuana donation
Charity shop workers in have been surprised with a mystery donation from a member of the local community.
Volunteers at the Goodwill store in , found marijuana mixed in with other items, deposited in the donation drop box while the store was closed.
Staff immediately contacted the police to report the find, although rather than being a misguided attempt to boost the store's takings with the illicit sale of contraband, it is suspected that the donation was more likely an accident that one individual is expected to be extremely upset about.
Officers in particular are skeptical as to whether any of the town's drug users are really that generous. 'I don't think they did it on purpose,' said police sergeant Ted Bordman. The authorities have confiscated the cannabis and have confirmed that it will be destroyed.
.
Designated driver didn't fare very well.
Donald Leet told deputies he had a glass of wine with dinner and his driver's license was suspended.
His girlfriend's 11-year-old daughter said he was teaching her to drive.
Whatever the reason, it ended badly when the girl crashed her mother's sport utility vehicle into a water pipe at First Baptist Church of Brandon
At the scene, Leet, 37, told deputies he had allowed the girl to drive. He said he had a suspended license and had one glass of wine but was not intoxicated, the report states.
"You are going to make me lose my job," he told deputies, the report states, adding: "Why don't you arrest a rapist or murderer instead of me. You're an illiterate Southerner. You don't know anything. You only have a high school diploma. You're dumb."
.
Posted by The Man at 7/21/2011 No comments:

If you are in a hurry

Now there's no excuse to miss the train at the Overvecht Station in .
The newly installed "transfer accelerator" allows commuters to quickly descend the station stairs and access platforms.
. 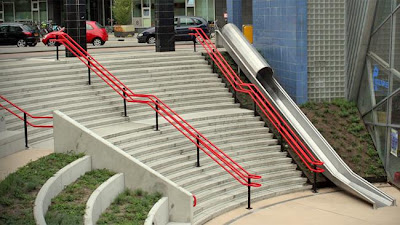 Click to Enlarge
At night the slide is said to play music from Bach.
The creation has designed by HIK Ontwerpers as part of their ongoing urban installations series.
A video posted on YouTube shows the slide in action, with the happy camera operator giving it the thumbs up.
.
Posted by The Man at 7/21/2011 No comments: