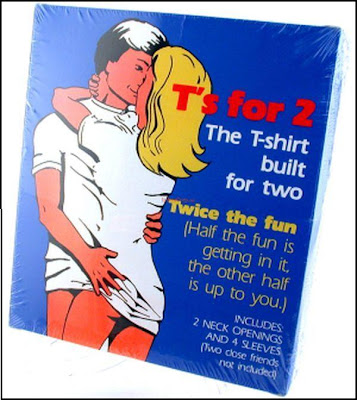 Dog Eating Cabbage
.
.
Mad Izatie said...
SO FREAKING CUTE!
It's enough to for me to rekindle my love for cabbages!
(Am totally gonna have some for dinner tonight.)
.
The Man said...
What about all the "Farting" that goes with eating cabbage?
.
Mad Izatie said...
Doesn't happen.
For me at least - beans, cabbage, they don't make me fart.
Coke does, tho. :P
.
Posted by The Man at 6/21/2008 2 comments:

What women should tell men…. but don’t

1. The reason why our bras don’t always match our underwear is because WE actually change our underwear.
2. The next time you and your buddies make jokes about armed women in combat, take a poll to see which of you successfully aim at the toilet rim.
3. If we’re watching football with you - it’s not bonding - it’s their butts.
4. Whenever possible, please try to say whatever you have to say after the movie.
5. Lay off the beans several hours before bedtime.
6. Please don’t drive when you’re not driving.
7. If you were really looking for an honest answer, you wouldn’t ask in bed.
8. The next time you make jokes about female drivers, research the number of accidents caused by rubber-necking mini-skirts.
9. If only women gossip, how do you and your friends keep track of "who’s easy"?
10. Stop telling us most male strippers are gay: we don’t care.
11. When you’re not around, I belch loudly, too.
12. We don’t mind if you look in the mirror to check your appearance - in fact, please do!
13. When you’re out with us, please wear "our" favorite outfit rather than "yours" - the torn jeans and dirty T-Shirt will last longer that way.
14. If you must grunt in reply, please develop a system to indicate a positive vs. a negative grunt.
15. Don’t insist that we "get off the stupid phone" and then not talk to us.
16. Eye contact is best established above our shoulder-level.
17. Cleaning the house is not necessarily "women’s work"; besides, most of the "dirt" and clutter is yours anyway.
18. Yes, we know most of the great chefs are men, why is it then you never want to cook?
19. We go to the Ladies Room in groups to talk about you.
20. Yes, we know you can probably beat us arm wrestling… however, very few raises or promotions were gained by arm wrestling the boss.
.
.
.
From
Posted by The Man at 6/21/2008 No comments:

Watching the kids play she notices a boy in the field stood by himself while all the other kids are running around having fun with a ball.
She takes pity on him and decides to speak to him.
"Are you ok?" she says
"Yes" he replied. "You do know that you can go and play with the other kids", she says.
"Its best I stay here" he said.
"But why?" says the blonde.
The boy says "Because I'm the f#cking goalie"
Posted by The Man at 6/21/2008 No comments:

Kate Moss, Mother of the Year?

Kate Moss bared all during an evening out with her 5-year-old daughter. 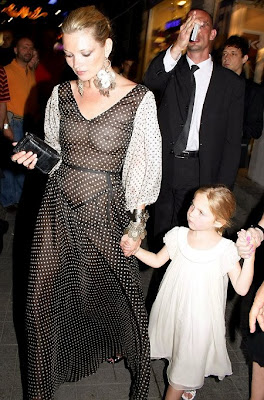 Kate Moss bared, well, everything in a sheer dress while attending an Istanbul art exhibit earlier this week with her rocker boyfriend and daughter. Mind you, little Lila Grace is just five years old.
But while Lila wore a white, modest, age-appropriate dress, the same can't be said for her mom. Kate, 34, dress - if you can call it that - with a thong under her dress, and opted to leave her bra at home.

Man tries to fuel up for pennies _ 1,000 pennies
DENVER - Talk about squeezing every penny at the gas pump. Denver police say clerks at a gas station had a run-in with a man who insisted on using $10 worth of pennies to prepay for his fuel on Thursday.
The clerks said they were too busy with other customers and vendors making deliveries to accept the sackful of cents. They said the man was insistent and became offensive, so they called police and referred to him as an "unwanted person."
Police say that before they arrived, the man left without any fuel but with his pennies. Station employees say he was driving a satellite TV truck.
.
Bullet meant for frog strikes woman in home
LUBEC, Maine — The Maine State Police said Thursday they have completed their investigation of a shooting incident in which a woman who was sitting inside her mobile home was injured when a bullet meant for a frog struck her leg.
The allege shooter was Chad Murrat, 18, of Lubec. According to the Maine State Police he was target practicing near the woman’s trailer when he noticed a frog in a nearby pond. He fired two rounds at the frog. At least one ricocheted off and went awry.
.
Dentist Accused Of Dropping Tools Down Patient's Throat Before Death
Victim's Daughter Filing Civil Lawsuit
WINTER PARK, Fla. -- A Central Florida woman is filing a civil lawsuit against a dentist accused of dropping a screwdriver and another medical tool down her father's throat that she claims led to his death.
In October of 2006, Anne Greer took her father, Charles Gaal, 90, to dentist Dr. Wesley Meyers in Winter Park for implants to secure his dentures.
During the procedure, Greer said Meyers dropped a medical screwdriver down her father's throat. She said it took a colonoscopy to have the screwdriver removed from his large intestine
The 90-year-old was hospitalized for 50 days and died from complications, according to Greer.
.
Drunken Arkansas Woman Fatally Runs Over Her Mother
A woman with a blood-alcohol level more than three times the legal limit for driving allegedly backed over her mother and left the scene even though loved ones yelled, "You killed grandma," police said.
Lisa Ann Casteel, 40, was charged with negligent homicide and driving while intoxicated.
Witness Michael Carey, who was named in the affidavit, said the group was at his house. He said people in the yard yelled "You killed grandma" at Casteel. Casteel got out of her SUV, checked on her mother, said she was breathing, then drove off, the affidavit said.
Casteel later returned to the house but was blocked by deputies when she tried to turn around and leave at the sight of their cruisers. The affidavit said a breath test showed Casteel had a blood alcohol content of .243 percent.
.
Man that could not stand is own B.O. goes to jail
Turns out something may be more offensive than body odor: trying to eliminate the smell by grabbing a stick of deodorant at a store, applying it, then putting the stick back on the shelf.
Police say that’s what Timothy Boggs did at an Anderson Township Kroger on Thursday. Boggs’s effort to freshen up resulted in his arrest, a night in jail and a guilty plea.
Boggs, 19, of Anderson Township, appeared in court today, where what had been a theft charge – of $3.79, the cost of the deodorant – was reduced to a charge of unauthorized use of property. Boggs pleaded guilty and was sentenced to the night he’d already spent in jail.
Posted by The Man at 6/21/2008 No comments: