Pole dancing is the one thing a blonde would be able to do.
Wrong!

Stupid Biker Gets Run Over by a Car

Hotshot Biker Gets Run Over by a Car on Highway

Bizarre Japanese Game Show: Real or Fake Orgasm
Posted by The Man at 6/24/2008 No comments:

Something staring back at me in a can of green beans
Texas wedding caterer Dale Cane found a dead rat's head in one of the twenty cans of Allen's Italian Green Beans he bought at Walmart. Allen's quickly offered Cane $200 if he agreed to keep quiet, and assured him that "the Pasteurization process renders the product sterile and completely safe for consumption." Even worse, this isn't the first time a dead rat's head popped up in a can of Allen's Green Beans...
Picture
.
Something Nasty Wriggles My Way
I stopped at the local Wal-Mart this morning to buy Ibuprofen whilst checking out, I noticed a bag of trail mix and decided that I would grab some. I had not had any in a while.
I opened them up just a little while ago and began to savor the nutty, salty, sweet goodness. I let the taste develop in my mouth for as long as I could before having to swallow it. I grabbed another handful, and another. Before I knew it, I had eaten approximately 1/4 of the contents of the bag.
It was in the next handful that I noticed something peculiar. Staring at me from in between two raisins was this dehydrated worm like creature. The length and girth of it reminds me of a leech, but the ridges on it remind me of an earthworm.
Pictures
Posted by The Man at 6/24/2008 No comments:

A minor league ball girl makes an incredible catch on a foul ball in left field.
.
Someone says it was a advertisement for Gatorade
"Ball Girl"
.
Stacy said...
Never underestimate a woman when she goes after something she wants
Posted by The Man at 6/24/2008 1 comment: 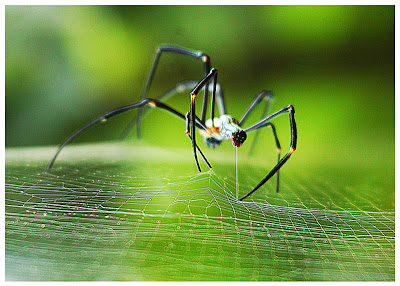 Thief caught on camera for third time
Footage revealed that it took Milsom just six seconds to smash the window and grab the sat nav from the undercover vehicle
James Milsom, 21, was filmed breaking into the covert vehicle, just six weeks after he was released from prison for stealing a sat nav from another unmarked police car.
It was the third time he had been caught in identical operations in just four months.
Footage revealed that it took him just six seconds to smash the window and grab the sat nav from a vehicle in Bristol before escaping in daylight.
Picture
.
Clothing-optional condo pool?
Tampa condo offers buyers clothing-optional pool
Free upgrades and paid closing costs not enough incentive to buy a condo in a sluggish housing market? How about nude swimming and sunbathing? The developers of Arbors at Branch Creek, a Tampa condo conversion, are hoping a clothing-optional pool will attract buyers. "We know there are people out there who will enjoy this amenity," said Christine Pirkle, director of sales for project-developer Eden Condominiums. "It's just become more accepted and people who want this option don't have very much of it."
VIDEO
.
God arrested near Tampa church
Police say a man named God was arrested near a Tampa church for selling cocaine. Authorities began investigating God Lucky Howard in April, and he was arrested on Saturday. Police say he sold the cocaine to undercover detectives in his neighborhood. When officers searched his home, they reported finding another 22 grams of cocaine and a scale.
Jail records show Howard was charged with several counts drug possession and distribution, which include increased charges for being within 1,000 feet of a church, a school and public housing.
.
Son turns his dead dad into a teapot
John Lowndes has no problem stirring up happy memories of his dad after putting his ashes in an urn with a difference.
He found that when Ian died 10 years ago aged 75, one of the things he missed most was their tradition of putting the world to rights over a nice cup of tea..
So he brewed up the idea of giving him leaf eternal by having his ashes mixed with clay to make a teapot.
John, 54, said: "Those cups of tea with dad were special and when he died I really missed them."
John, of Broad Haven, Pembs, approached local potter Neil Richardson who made two teapots - in case one breaks. John added: "Dad would understand. The only thing more appropriate would have been a pint glass."
Pictures
.
Man Charged With Driving Wheelchair While Drunk on Highway
A man found asleep in a motorized wheelchair on a highway in northern Australia was charged with drunk driving, police said Monday.
Officers in a patrol car noticed the man slumped in the stationary chair about 10 a.m. Friday on an exit lane near the tourist city of Cairns, regional traffic Inspector Bob Waters said. Cars were swerving to get around him, Waters said.
The officers breath-tested the 64-year-old man, who registered a blood alcohol reading of 0.301 — more than six times the legal driving limit. He was charged with operating a vehicle while drunk and ordered to report to court on July 7, where he faces a stiff fine if convicted.
"The vehicles that we normally hear about with drink driving are the family car, the truck, the motorbike," Waters said. "But there are also other classes of vehicles that are subject to drink-driving laws," including horses, bicycles, and motorized wheelchairs.
The man, whose name was not released, told police he was making a nine-mile trip from his home to a friend's place, Waters said.
"He placed himself in a very dangerous situation," he said.
.
Man Arrested for Kidnaping, Mother Over Death of Pet Skunk
A man accused of assaulting and tying up his mother because he was reportedly mad about the death of his pet skunk has been arrested in Waldron, authorities said.
Authorities say 35-year-old Scott Tolles Sullivan was arrested early Saturday in Waldron. He is being held without bail in Van Buren. Authorities say he hid from police in an attic and was arrested after police shot him with a bean bag gun.
Sullivan's mother, 56-year-old Maria Sullivan, called police Wednesday night after freeing herself from duct tape and rope, authorities said. Maria Sullivan told police that her son became upset when he learned that her dog killed his pet skunk.
According to police, Sullivan said her son hit her with a homemade club and tied her up. She says Scott Sullivan also tied up a 14-year-old disabled boy who is under her care.
Scott Sullivan was arrested on suspicion of two counts of kidnaping and domestic battery.
.
Man survives shooting himself in the head
A 36-year-old Salina man survived shooting himself in the head after pulling the trigger of a gun he thought was empty. Shannon D. Austin avoided serious injury when the .22-caliber revolver discharged a bullet above one of his eyes on Sunday morning, said Salina Police Deputy Chief Carson Mansfield.
The bullet hit Austin's skull above an eye, but didn't penetrate the bone. Austin was treated at a local hospital, where police ticketed him for shooting a firearm within city limits.
Posted by The Man at 6/24/2008 No comments: