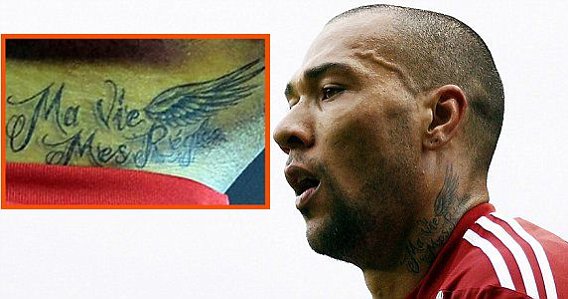 Because of a misplaced 'é' accent, his tattoo means 'My life, My menstruation'. His tat was apparently supposed to read 'My life, My rules'.
.
Posted by The Man at 8/22/2011 2 comments:

Crews clean up soggy toilet-papered river
environment officials say crews finished removing massive rolls of unprocessed toilet paper that fell off a truck and were lodged for weeks in the upper .
Earlier attempts to pull out the paper was called off when it began disintegrating, creating an even bigger mess.
Department of Environmental official John Cardwell says teams yanked out the remnants last weekend when lower river flows made the work more manageable.
Crews wrapped the rolls with a reinforced mesh before they were pulled out by a tow truck.
The rolls landed in the water after the truck hauling the load along U.S. Highway 12 slid into the river. The driver was cited for inattentive driving.
.

Police set-up nets 22 arrests
Police put up a sign in south to let drivers know there was a checkpoint ahead, but what was really going on was a ruse.
There was no checkpoint, just several Gainesville Police Department officers watching for drivers who saw the sign and then turned around or who appeared to throw something out of their vehicles. Those vehicles were pulled over.
Police spent nearly eight hours on the detail near the intersection of South Main Street and 16th Avenue.
“This was a ruse detail,” said Lt. David Rowe. “Officers stopped 58 vehicles and most of the 22 arrests were for felony drug charges but there were also a few people arrested on warrants.”
Police said they planned the ruse because of drug and burglary complaints in the area.
.

Every Friday night for 23 years, Zeli Rossi has traded his bed for a coffin.
Rossi tells that his weekly sleeping habit became public last month when his 14-year-old grandson wrote a story about him for his school's newspaper.
. 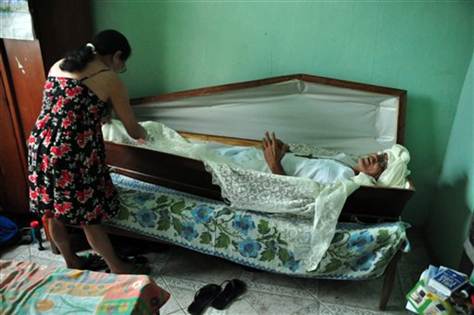 .
Rossi says he sleeps in the coffin to honor a deceased friend.
Long ago, the two promised each other that whoever died first would have his casket bought by the other. Rossi's friend bought him a coffin when he mistakenly thought Rossi had died in a 1983 car crash.
When the friend died in 1988, Rossi started sleeping in the coffin to honor his memory.
And he also kept his promise to buy the dead friend a "brand new" casket.
.
Posted by The Man at 8/22/2011 2 comments: