Armless Bowler Gets A Great Strike
Posted by The Man at 8/16/2008 No comments: 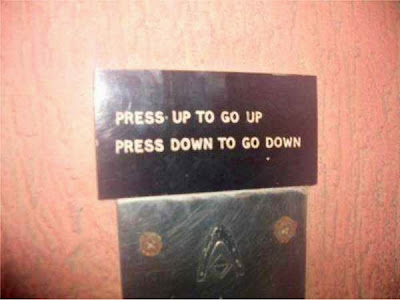 It Doesn't Get No Easier Then That
.
Lucifer said...
yep, but I know 2 or 3 people that press 'down' when they want the elevator to come down,
even if they want to go up. What lames...
.
aproposofnothing said...
The problem when making something idiotproof
as that someone invariably makes a better idiot
Posted by The Man at 8/16/2008 No comments:

How Simon Cowell makes do on his paltry £35m salary

This month he secured his place as the best-paid male television personality in the world, with a £25 million-a-year contract to present American Idol alone.
Recent estimates have put his wealth at £112million. Throw in earnings of at least £10million for hit shows on this side of the Atlantic and it becomes clear that Simon Cowell just can't help earning vast sums of money.
.
Mr Nasty is also an expert when it comes to spending.
The extraordinary lifestyle of the man who left school at 16 to be a humble record company mail boy. Asked if he thought there was anything obscene about the money he is paid, Simon's response was typically frank: 'I don't have any conscience about this at all.'
.
Simon spends a small fortune on his wardrobe.
His favorite designer is Giorgio Armani and he thinks nothing of spending £5,000 in one shopping trip on T-shirts alone.
Shoes are hand made by Berluti in Paris, at an almost reasonable £1,000 a pair.
Simon prefers to take his holidays in luxury hotels where every whim is catered for.
Top of his list is a £3,000-a-night suite of rooms at the exclusive Sandy Lane hotel in Barbados.
Simon is proud to admit that he never cooks and dismisses the huge kitchens in his luxurious properties as 'irrelevant'. As a result he eats in the world's finest restaurants as a matter of course.
.
Of all his indulgences, cars are surely top of the list. In one week last October he spent well in excess of £1million on a pair of supercars.
The first, currently his favorite, was a turbo-charged Bugatti Veyron.
With a top speed of 250 miles per hour, it can reach 60mph in less than two-and-a-half seconds, and you'd hope so, given its price tag of £750,000.
.
In LA, where he is based for half the year, he has a £10million pad in Palm Drive and a £2.3million property in the Hollywood Hills that he bought for his girlfriend, Terri.
Having heard the heart-rending story of how three-year-old Madelaine Stoen's parents were struggling to pay for her cancer treatment, he spontaneously announced that he would pay off their £80,000 mortgage.
PICTURES and More
Posted by The Man at 8/16/2008 No comments:

Real or is it Fake? 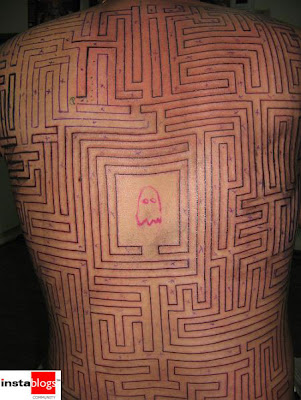 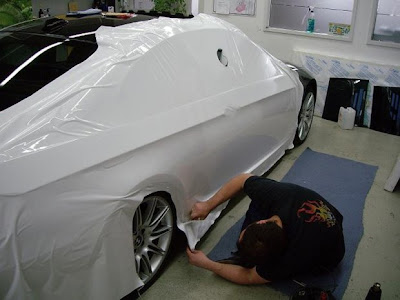 This guy wraps his black BMW in white foil tape.
.
PICTURES and More
Posted by The Man at 8/16/2008 No comments:

In the original Star Trek a crew member dies all the time?
Do you know what color shirt they were wearing?
Here are a few scenes from Star Trek.
.
.
Posted by The Man at 8/16/2008 No comments:

A absent minded man forgot his glasses wins $3 million
Bobby Guffey usually plays the same combination of numbers representing the birthdays of his five children. But he left his glasses at home when he bought the winning ticket Aug. 6, accidentally entering the last number as 48 instead of 46.
The Hoosier Lotto ticket ended up being worth $3 million.
Guffey, who's from the northeastern Indiana town of Roanoke, said he didn't realize he'd used the wrong number combination until he had left the Huntington service station where he bought it. He went back inside to buy a ticket with his usual numbers and that ticket won him $1,000 to go along with the jackpot.
.
Pigeon found at NYC playground was painted purple
Pigeons come in many shades in New York City _ but purple is typically not one of them.
That's why animal lover Joe Mora was stunned when he saw a pigeon at a Queens playground that had been painted a violet hue.
The pigeon was taken Friday to licensed wildlife rehabilitator Bobby Horvath. The bird is unable to fly because the feathers are completely rigid from the paint. But he says the animal is lucky its mouth or eyes didn't get stained.
American Society for the Prevention of Cruelty to Animals spokesman Joseph Pentangelo says if the bird was intentionally painted it "certainly" qualifies as animal cruelty.
.
OLYMPIC NEWS
Gymnast Alicia Sacramone an Internet 'Hottie' Despite Screw-ups
She may have cost Team USA the gold medal in the women's gymnastics team competition, but Olympian Alicia Sacramone can still stake claim on top honors for Internet attraction.
In the moments after Tuesday's heartbreaking loss to China, Google searches for "Alicia Sacramone is hot." Olympics viewers logged on to find photos of the 20-year-old Massachusetts native.
PICTURES and More
.
Get Your Beer Here
If it's food you're after at the Games, there are slim pickings at Olympic venue concession stands but plenty of beer. Because visitors aren't allowed to bring in food, it's impossible not to make a stop at the Olympic concession stand, as lines have proved.
Besides the limited food choices, there's also little that reflects Chinese tastes, except for the cup of dry noodles and crispy rice. Olympics fans also can choose from popcorn, chips, sausage, bread, cake, biscuits, yogurt, ice cream and Snickers.
But some Chinese don't seem to mind the menu. At Wednesday evening's soccer match at the Worker's Stadium, Zhang Lin, a 10-year-old Beijing resident, sampled one sausage and liked it so much he returned and ate four more.
For Americans used to stadium prices, five sausages might set you back more than $25, but here in China the price was only15 kuai, or just $2.21. In fact, nothing cost more than $1.50, so despite few food choices, ordering one of everything would still cost less than $10.
But while Chinese food might be missing from the menu, China's favorite drink — beer — is not. China is a nation of beer drinkers, topping the world as both the largest producer and consumer.
And if the food seemed cheap, the beer is the best deal here. It costs the same as soda, just 73 cents — A cause for celebration by the group of young American guys sitting behind me at the USA vs. Nigeria soccer match as they ripped off their shirts leading the Chinese in a round of "Zhong Guo Jia You!" (Go China) cheers, showing everyone the drunken revelry of American sports fans.
PICTURE and More
Posted by The Man at 8/16/2008 No comments: