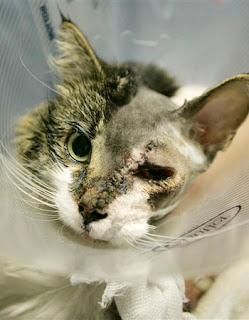 Cat's Face Reattached After Car Fan Belt Accident
Veterinarians performed an unusual surgery to reattach the face of a cat they believe was injured by a car's fan belt, probably because she tried to stay warm under the hood.
Edgar, a 4-year-old long-haired feline, went missing from her home in Winthrop for three days last week. When she finally came home, her owner found her in her litter box — with part of her face dangling from her head.
"When her owner saw her face, she passed out," said Elizabeth Kendrick, a surgical technician at Angell Animal Medical Center.
The owner, who asked not to be identified, recovered from the shock and rushed Edgar to an animal hospital.
.
.
Aw, poor cat. they do really have 9 lives.
At Lest This One Does.
.
.
Posted by The Man at 12/10/2008