Woman attacked in Scotland ‘because she sounded English’ 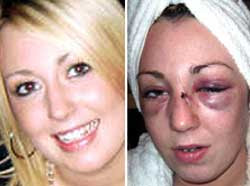 Police treating incident as racially motivated
A young woman who comes from England originally has been viciously assaulted in a Scottish city center in what police are treating as a racially motivated attack.
Lucy Newman, 22, who lived in Cheltenham as a child, claims her male attacker said "Get back to England" before punching her in the face. She was left with serious injuries after the attack last Saturday in Aberdeen.
Ms Newman, who was on a night out with a female friend, said she was hit so hard that she fell, hitting the pavement and fracturing her left cheekbone. The nerves in her eye have also been damaged. "We had just left a club and were going to catch a bus," said Ms Newman, a beauty therapist who has lived in Scotland for about 15 years.
.