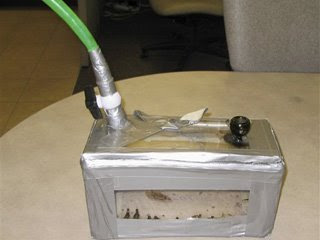 A Omaha, Nebraska man who tried to mellow out his cat by stuffing her into a homemade bong, consisting of a piece of garden hose attached to a duct-taped Plexiglas box is facing criminal charges.
Authorities cited a 20-year-old man on suspicion of animal cruelty Sunday after catching him smoking marijuana from a contraption that had a cat stuffed inside its 12-inch by 6-inch base.
The man told Lancaster County sheriff's deputies the 6-month-old female named Shadow had been hyper and that he was trying to calm her down.

.
Tattoo Jim said...
What the fuck is this??? Crazy cat owners week???
Is somebody handing out prizes for the strangest owner out there????
These people are fucking nuts!!!
.
And this world is full of them.
.
Scheme Factory said...
See, all you "eye for an eye, tooth for a tooth" people?!
If this guy got the same for punishment He'd be thrilled!
.
I hope he won't be so lucky.
He needs to be locked in a jail cell,
the size of a janitor's closet and forgot about.
.
Mad Izatie said...
Sickofantic freak, I hope he gets gangbanged in the prison shower.
.
Posted by The Man at 3/03/2009