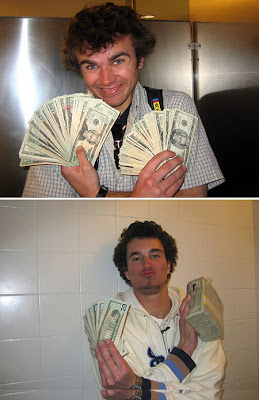 Dumb and Dumber:
Robs a bank, pose with loot, get arrested
Grinning stupidly for the camera and brandishing the proceeds of their ham-fisted raid, two Australian bank robbers demonstrate why they earned themselves the nicknames "Dumb and Dumber."
Anthony Prince, 20, and Luke Carroll, 19, were jailed last month after pleading guilty to the bungled raid on a bank in Vail, Colorado. Carroll got five years in a tough US prison and Prince 4½.
Federal prosecutors have released photos the pair took of each other joking in the toilets of a McDonald's shortly after stealing $170,000 in cash and terrorizing bank tellers with fake pistols.
They were captured the next day after leaving a trail of clues, which investigators said made their job laughably easy. Prince and Carroll had been regular customers at the bank and although they were wearing masks, the tellers recognized their broad Australian accents.
Posted by The Man at 3/03/2009