Scandal of tattoos on cats 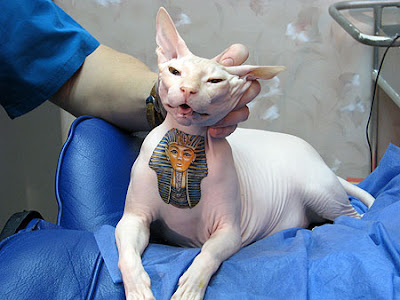 Still dazed after being anaesthetised for three hours, a pedigree pet is hauled upright to show off its new tattoo.
The controversial "body enhancement" was carried out on Mickey – a rare Canadian Hairless breed also known as a Sphynx cat.
His female owner was said to be delighted with the Tutankhamun design inked on to his chest at a tattoo parlour.
She said: "I wanted something new and different for the times we live in."
But horrified animal rights campaigners last night slammed the sick fad in Moscow as barbaric – and fear it could catch on among wealthy pet owners in the West.
An RSPCA spokesman said: "We are totally against using animals for purely cosmetic reasons just on the owner’s whim. Clearly the animal has no say in the matter.
"We do not believe in using pets as fashion accessories. It shows no respect for the animal whatsoever. So far we have only heard about this practice happening overseas – and we hope it doesn’t spread."

.
Anonymous said...
This is bad, but not much worse than tail or ear bobbing.
Are we supposed to think it's OK to tattoo, cut off an animal's fully functional tail or ears, and keep the animals in tiny cages, well it's NOT OK!
.
Tattoo Jim said...
When that cat says that it wants a tattoo, then you can give it a tattoo.
If it doesn't say so, leave it the fuck alone!
.
Scheme Factory said...
We cut their gonads off- many folks would think that's much worse!
.
Anonymous said...
The cat didn't say it didn't want a tattoo.
.
Anonymous said...
I dont care what the animal rights people say, Id like to hear a cats opinion about having their nuts sliced off because WE decide it.
.
Posted by The Man at 3/03/2009

this is unbelievably horrible...i hope people dont do this as a fashion thing... that poor cat...this should be illegal!!!

That is just wrong period

Ok the one to say something about fixing animals is wrong. . . . come on lets compare apples to apples! Fixing an animal is for the good of their own. Have u been to a humane society lately and seen all the homeless animals? Tattooing a cat does nothing to help animals. People need to get lives! That poor cat!!!!!

Animals should never be used for inking its wrong and way out of order n i bet the cat hates it!