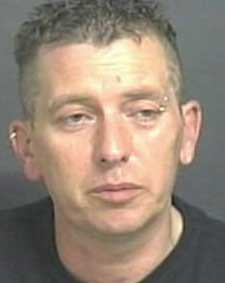 A loan shark who preyed on alcoholics and drug addicts by charging interest rates of eight million per cent has been jailed.
Ruthless Ian Jenkins, 43, took the Post Office benefit cards and pin codes of 55 homeless victims so he could get their repayments plus extortionate premiums directly from their accounts.
Jenkins, of Abbeymead, Glos, lent them cash to feed their habits. He then took £3 interest for every £10 borrowed.
In one case, a drug addict who was loaned £106 was stung with rolling daily interest of 30%. That worked out at eight million per cent annually if the debt was not settled. Jenkins, a recovering drug addict who has 52 previous convictions for crimes including shoplifting and theft, was caught after an anonymous tip off in June last year.
Undercover agents from the South West Illegal Money Lending Team then filmed Jenkins outside a Post Office making a handover of money.
He was jailed for eight months at Bristol crown court on Monday after admitting one charge of money lending outside the Consumer Credit Act.
Judge Julian Lambert told him: "You acted in total disregard of the law and you kept on and on lending to these poor souls was extensive and cynical."
.
Posted by The Man at 6/11/2009