Bank Robber Waits Too Long To Put On Mask 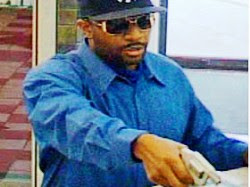 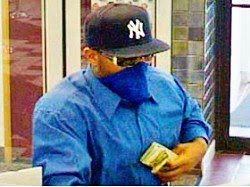 COLUMBUS, Ohio — Authorities on Friday released surveillance images from a bank robbery on the city’s north side.
The robbery happened shortly after noon at the National City Bank, located at 1886 North High Street.
According to a release from the FBI, a man walked inside the bank and sat in a lobby chair until other customers left. He then walked up to a teller, produced a silver handgun and ordered the teller to give him money.
It was only after he demanded cash that the robber pulled a blue mask over his face in an attempt to conceal his identity.
The robber was described as a black man in his 20s or 30s, who was about 5 feet 7 inches tall.
He had a thin build, and was wearing dark blue Yankees cap and sunglasses during the robbery.
Authorities said a dye pack mixed in with the cash likely exploded inside his getaway vehicle.
Posted by The Man at 5/28/2008