Maybe he needs a driver not a license 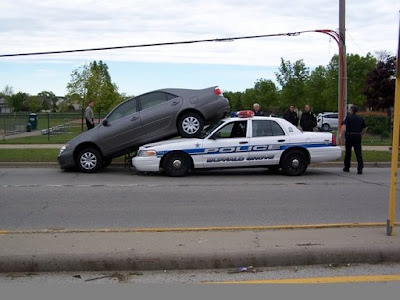 A man who had just been pulled over by police ran backwards over a Buffalo Grove squad car Friday morning, apparently in haste to drive off.
Henry Raskin, 70, of Niles had been pulled over by a Buffalo Grove officer on the 400 block of Dundee Road around 11:30 a.m. Friday for driving 58 mph in a 35 mph zone, Sgt. Scott Kristiansen said.
The officer wrote the ticket and returned to the car, and Raskin got ready to drive away. Except he went flying backward.
"(He) apparently was going to pull away at a high rate of speed, but the only problem was that he was in reverse," Kristiansen said.
He said Raskin was not happy about getting a ticket. He said police are reviewing the squad car videotape to see what Raskin might also be charged with.

Labels: "Ooops", In The News, Vehicle