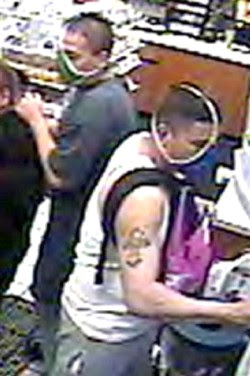 Police hunt for robbers wearing thongs as masks
ARVADA, Colo. - Police in a Colorado town are searching for two robbers whose masks showed plenty of fashion sense but little modesty: women's thong underwear.
A surveillance video released this week by police in Arvada, Colo., shows two unarmed men inside the convenience store. They stole an undisclosed amount of cash and cigarettes in the robbery May 16.
One man wore a green thong and the other wore blue. Each thong barely covered the man's nose, mouth and chin and left the rest of his face exposed. One also wore a pink backpack in which he stuffed the stolen items.
The suspects also wore T-shirts and pants and were described as in their 20s. One had a left arm tattoo.
Posted by The Man at 5/31/2008