Man deliberately froze leg so it would be taken off 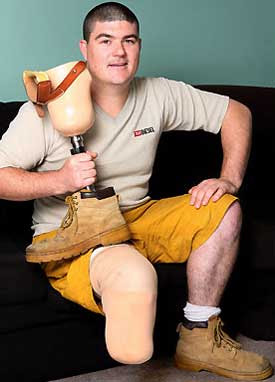 A father of two has told how he deliberately froze his right leg so it would have to be amputated.
David Openshaw, 28, suffers from body integrity identity disorder (BIID), which makes victims seek amputation of healthy limbs.
Surgeons refused to remove his right leg. So he plunged it into a bucket of dry ice for hours until it became so damaged it had to be removed below the knee.
And David, who says he "hated" the leg since he was four, is delighted with his false limb. He said: "The excruciating pain from the dry ice was worth it." The chicken factory worker claimed he is now much happier and the amputation has even improved his love life with Joanne McWilliam.She said: "We’re closer than ever." But David, of Sydney, Australia, insisted he did not want to damage his other limbs.
Posted by The Man at 6/18/2008