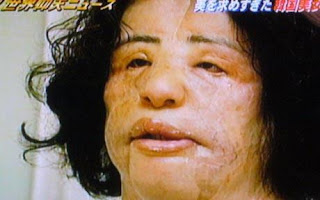 A Korean woman addicted to plastic surgery has been left unrecognizable after her obsession led her to inject cooking oil into her face. Hang Mioku, now 48, had her first plastic surgery procedure when she was 28 and moved to Japan where she had further operations - mostly to her face. Her face was eventually left enlarged and disfigured, but she would still look at herself in the mirror and think she was beautiful.
Posted by The Man at 11/15/2008

i saw that japanese tv show, and that said she dislike to see herself in mirror because she recognized she is agly. she also regretting the plastic surguries she has done by herself. that is what i have saw from the tv show.