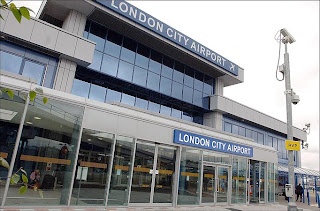 A pilot was furious at being searched before flying dropped his pants and exposed himself to security staff, then raged: "Do you want to search this?"
His flight had to be cancelled as police were called and the pilot was quizzed — but not arrested.
Thirty-seven passengers on the Swiss International Airlines flight from London City Airport were delayed for two hours yesterday as the row erupted.
"The pilot was asked to take off his shoes and belt like everyone — but completely lost the plot.
"He pulled down his trousers and pants to completely expose himself, then turned to the security guard and asked angrily, ‘Do you want to search this?’"
The incident happened at the East London terminal’s downstairs security gate, which is not used by the public.
"All pilots have to go through these procedures so no one can understand why he reacted the way he did. Perhaps he was having a bad day."
An airport spokeswoman said staff followed Government guidelines on searching pilots. The passengers caught the next flight.
.
Posted by The Man at 2/18/2009