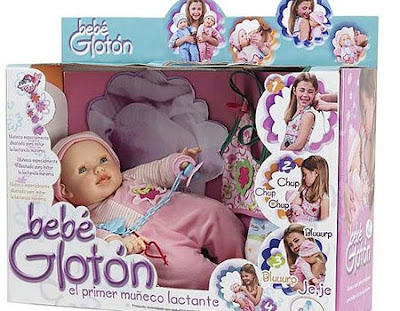 A controversial new doll is leaving some parents wishing for the good old Cabbage Patch days.
A Spanish toymaker known as Berjuan has developed a breast-feeding doll that comes with a special halter top its young "mothers" wear as they pretend to breast-feed their "babies." The halter top has daisies that cover the little girls’ nipples and come undone just as easily as the flaps of a nursing bra would.
The doll — called Bebe Gloton, which translates as "gluttonous baby" — makes sucking noises as it "feeds."
Like many other dolls, Bebe Gloton can cry, signaling she wants more milk.
Although many health care providers promote the benefits of breast-feeding, parents around the world have criticized Berjuan, saying the idea of breast-feeding is too grown-up for young children -- and may even promote early pregnancy.
.
Posted by The Man at 8/07/2009

That's just totally wrong in so many ways.

"This is bizarre. Why would a parent make a little girl so conscious of her body as a baby making and feeding machine?"

"THIS IS REALLY UNACCEPTABLE, AND WARPED ,PARENTS SHOULD BOYCOT THIS COMPANY!"

"this sets a horrid precidence."

Brought to you by fine upstanding people at the "Pedophilia Toy Company" whose corporate motto is "What???? We dont see anything wrong with that...."

"I'm honestly at a loss for words on this one. I just can't figure out why any company, anywhere, would find this a good idea?"

What a great idea. I don't want my kids thinking that it's normal to feed a baby with a bottle. I don't remember any negative comments about the baby that goes potty.

"Pathetic. Little grils are growing up fast enought without that."

"having seen me breastfeed, my neice copied me with her dolly..but actually making and selling one especially for that reason...agree with you Bethany. NOt the best idea in the world"

"What next? And I thought the crying babay doll was bad enough..."

Maybe because I was brought up by a Mom who wrote a book on breastfeeding and I grew up hanging out in La Leche League and have been breastfed live on the radio twice (early 1970s) and I used to try to breastfeed my own dolls but I don't see what's horrible about this. We are teaching little girls that you don't have to just shove a bottle in it's mouth and there are healthier, cheaper ways to feed your baby.