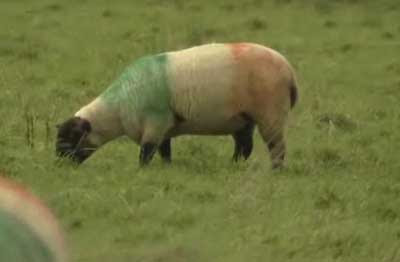 Six sheep belonging to a farmer who lives near Ardboe in County Tyrone have been targeted in a paint attack.
The man, who is a Protestant and wants to remain anonymous, said his animals had been daubed with tricolors.
The farmer said he would usually have sold the sheep by this stage but he cannot bring the animals to market covered in the indelible dye.
He said he will now have to wait until next May when their fleeces can be shorn.
VIDEO
.
Posted by The Man at 11/06/2009