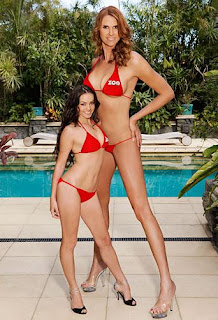 Talk about a big splash! An American model measuring 205 cm (she's about 6'9") is set to be featured on the cover of Australian magazine Zoo Weekly.
You think you've seen it all. The model, named Eve, appears on the cover of the magazine's current issue alongside a 162 cm-tall (5'3") Aussie model.
On Seinfeld, George Constanza dreamed of one day sleeping with a giant woman. But George was a short, bald fella. To him, tall meant about 5'11".
Eve is truly head and shoulders above the other models out there.
"No other magazine has put a woman who's nearly seven feel tall on the cover," Editor Paul Merrill said, and he's probably correct in that assumption.
"We had ... her bikini specially made, but it was worth it."
Posted by The Man at 12/01/2009