What not to use to clean your ears out 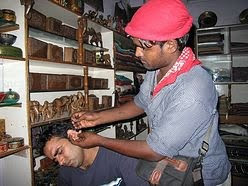 An Air India plane was grounded by anti-terror police when a passenger was found carrying matches - to clean out his ears.
The flight from New Delhi, India, to Bangkok was stranded for four hours after Rashid Rehman was found trying to carry a box of matches onto the plane.
Tightwad Rehman, 32, told police he didn't use cotton buds because he could get matches for free at bars and restaurants.
"More than a hundred passengers were stranded because of this man's filthy habit. Well at least they didn't have to sit next to him while he was doing it," said one officer.
.
Posted by The Man at 1/27/2010

Filthy habit you say? How about ear wax falling out of an ear and rolling down the front of a shirt; that qualifies as filthy, don't you think? And how about the pictures of life in India that may very well show individuals standing on the street getting their ears cleaned by someone else for a fee; do you not see the irony here?

"semtex does a good job"