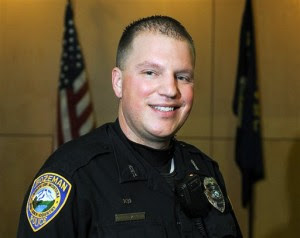 Bozeman Police Officer Marek Ziegler was called to Van's IGA last Friday night to check on a shoplifting report.
The 33-year-old officer has been on the Bozeman force for three years. He is a K-9 handler and works nights, from about 9 p.m. to 7 a.m.
When he got to the grocery store on North Seventh Avenue, employees told Ziegler that a 32-year-old man had stuffed food and "pens, pencils, maybe markers, things for his kids" into his coat.
The officer arrested the man, cited him for theft and then released him.
But the story didn't end there.
.
Posted by The Man at 3/08/2010