A Park Orchards man who erected a sculpture of a middle finger gesture in his yard and head butted a neighbor has been described by a magistrate as “the neighbor from hell”.
. 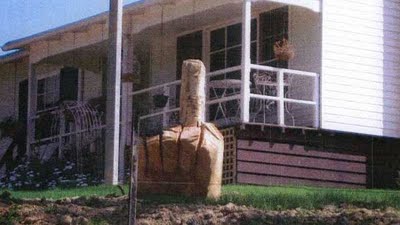 .
Ringwood Magistrates’ Court has heard David Muscat, 47, felt he was “at war” with the other residents of Frogmore Cres during the long-running feud.
used a chainsaw to carve the 1.2m wooden sculpture in his front yard after his neighbors complained to Manningham Council that he had cleared trees on his property.
The court last week heard two months later assaulted his neighbor, John Washbourne, who had asked him to turn off a leaf blower that was sending dust and debris into the caravan Mr. Washbourne was cleaning.
Prosecutor acting Sgt Jo Allen told the court last Monday that police obtained 20 statements from residents who found the sculpture indecent, offensive or inappropriate.
pleaded guilty to charges relating to the assault, sculpture and failure to turn off his stereo and was convicted and fined $700.
In a separate hearing, was fined $10,000 by Manningham Council after pleading guilty to removing vegetation and doing earthworks without a permit.
.
Posted by The Man at 8/04/2011