Here is a modern Zero-Gravity Toilet on board the International Space Station. 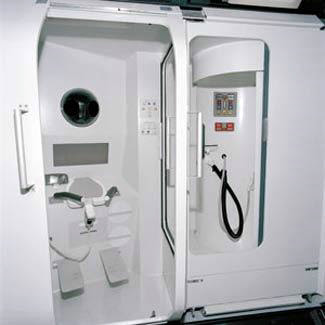 CAPE CANAVERAL, Fla. — NASA has agreed to pay $19 million for a Russian-built toilet system for the international space station. The figure may sound astronomical for a toilet in space, but NASA officials said it was cheaper than building their own.
The astronauts are familiar with how it works since it's similar to one already in use at the space station. The new system will be able to transfer urine to a device that can produce drinking water.
The new system is scheduled to be delivered to the U.S. side of the space station in 2008. It will offer more privacy than the old toilet system, which will definitely be needed: The space station crew is expected to grow from three to six people by 2009.
The space station toilet physically resembles those used on Earth, except it has leg restraints and thigh bars to keep astronauts and cosmonauts in place. Fans suck waste into the commode.
Crew members also have individual urine funnels which are attached to hoses, and the urine is deposited into a wastewater tank.
The $19 million toilet system was part of a larger contract valued at $46 million that NASA signed this week with RSC Energia, a Russian aerospace company.

Labels: In The News, Why?