Why Do We Eat Oysters? 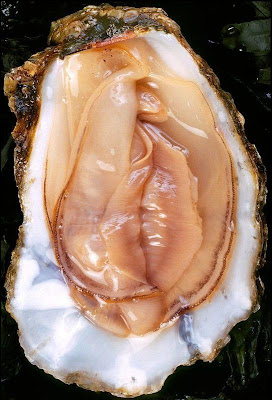 .
.
.
.
.
.
.
Many believe that oysters were originally labeled "aphrodisiac" because of their shape.
Upon close inspection, they somewhat resemble the female sex organ. This could be a reason why people in the past associated mussels with sexuality. Sexual appetite, more often than not, starts in the mind rather than in the body, so oysters could have a psychological effect on the libido.
.
Mad Izatie said...
Looks very familiar. :D
.
The Man said...
You have seen something like this before?
.
Mad Izatie said...
uhuh. I certainly have. :)
Posted by The Man at 6/25/2008