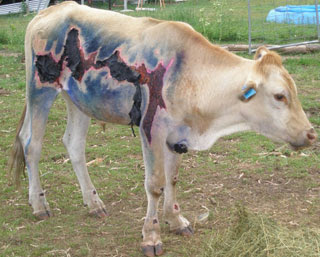 In a moo-ving experience, this cow is believed to have been struck by lightning and somehow survived.
This is no mad cow story. It's entirely feasible, according to JCU Professor of Geo-Sciences, Jon Nott.
"Cows are susceptible to lightning strikes because of both sets of legs being on the ground, and they're eating grass from where electricity is conducted from the strike so it is possible it happened but, more often than not, cows die from it," Prof Nott said.
"The electricity from a lightning strike would enter the front set of legs and exit out the back legs so, again, based on the picture, it is possible it happened," Prof Nott said.
.
Noel said...
That provides "Fresh Meat" a new meaning!
.
Posted by The Man at 2/03/2009