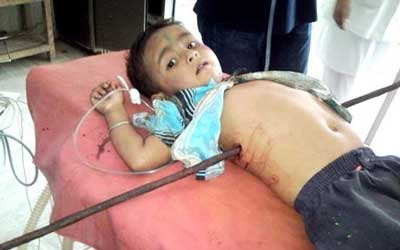 A six-year-old boy has survived falling off the roof of a house and landing on an upturned metal pole.
Mihir Kumar was celebrating the Holi festival in Ranchi, India, when the accident occurred.
He slipped off the roof of his family home and landed on a the five foot-long iron rod that was left standing on a building site.
The pole punched through his rib cage and came out the other side.
His father said Mihir "endured terrible pain".
He was rushed to hospital where he underwent three-hour surgery at the Rajendra Institute of Medical Sciences to remove the rod.
He is now recovering in hospital.
Dr Sandeep Agarwal, one of the three surgeons to operate on the boy, said he had miraculously escaped major internal injuries.
.
Posted by The Man at 3/14/2009

WHAT was a 6-year-old doing playing on the roof of a house??? Where were the parents then?????

(A miracle that he's still alive, but the parent should be flogged...)

Holy shit!!! That's is fucked up!!! One thing I wonder tho, where did they find a doctor in India? I thought they were all over here...