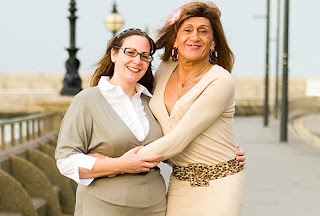 When Emily Wallis tracked down the dad she had never met they had more in common than she expected… including their taste in shoes, dresses and make-up.
Instead of the “Italian Stallion” her mother Ann had described, Clive Harrison was a lipstick-wearing, bewigged transvestite who now calls himself Chloe, and has EIGHTY-TWO pairs of high- heeled shoes.
Emily, 22, says: “Chloe was squeezed into a silver dress and wearing make-up and a wig. I had no idea what to do so I said, ‘You look better than me… and I really like your shoes’.”
Emily adds: “For years I had dreamed of us all being reunited. I’d even secretly harbored a hope that Clive and Mum might get back together. But when I saw my dad I realized that certainly wasn’t going to happen!”
.
Posted by The Man at 11/29/2009