Russian School Graduation Girls
It is a very important day for the Russian high school students, because next it’s an adult life that is waiting for them. That's why they party and have fun. 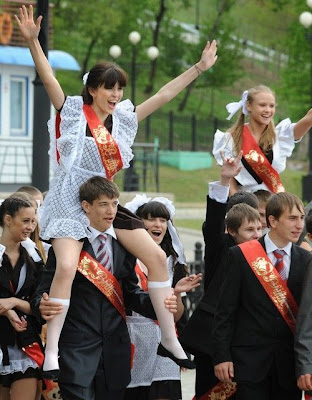 .
.
.
Senior Prank Teens Caught Red-Handed
Police in San Diego say a dozen high school students were caught in the act of moving hundreds of desks and chairs out of classrooms as part of a senior prank.
Police spokeswoman Monica Munoz said students obtained a copy of San Ysidro High School's master key and snuck onto campus early Tuesday. She says they were stacking desks and chairs in the hallway and putting furniture on a field in the shape of "09."
Munoz says their activity triggered motion sensors, which prompted the school's alarm company to call police.
Police cited the students who were 18 for trespassing, and those under 18 for curfew violation.
They were ordered to return the furniture to their original locations.
.
Posted by The Man at 5/27/2009