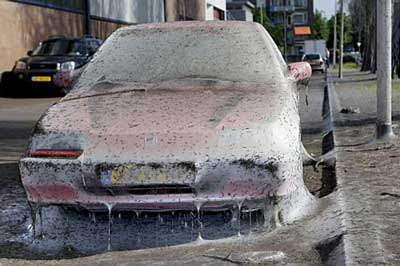 An invasion of caterpillars has turned the Spui in the Dutch city of Rotterdam into a scene from a horror movie, stripped of their leaves and covered in gluey sheets of silk. The Ermine moth eat the leaves on the trees for six weeks long, then the larvae cover the trees in cocoons of silk like giant spider webs and change into a white butterfly with black dots.
The city now looks as it would in the middle of winter with trees without a leaf on them in the streets of the Spui, Rotterdam.
When the tree has no leaves left, the caterpillars will search for new plants, and crawl with thousands on bikes or cars parked under the trees.
There are several hundred species of ermine moths, most of them in the tropics, and the larvae are known for forming communal webs.
The silk web cocoons that they make are designed to protect them from birds and parasitic wasps so they can eat leaves undisturbed. Some species of the moth are considered minor pests in farming, forestry and horticulture because of infestations.
Statistics show an increase in the number of caterpillar pests in the last twenty years. The eggs survive much better with the softer and wetter winters. Many people are disgusted with the creepy creatures.
It is an interesting natural phenomenon and possibly related to climate change.