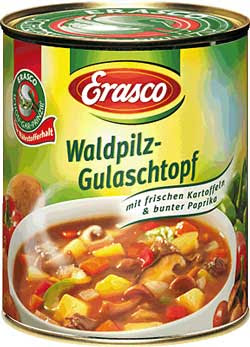 A worker at a Lübeck soup factory died after getting trapped inside a giant cauldron and cooking to death.
The accident happened at midday on Friday, the newspaper reported, when the man climbed into a cauldron at the Eraso soup factory to clean it.
The cauldron’s lid suddenly closed while the 36-year-old was still inside and began to fill with steam as part of the disinfection process.
A doctor confirmed that the unidentified man had been cooked to death.
Erasco makes soups, stews and other foods at the Lübeck factory. The company has been in business since 1873.
"The circumstances of how such an accident could have occurred have not yet been explained," Lübeck police spokesman Detlef Ridel told Bild.
The police and the city’s office for workplace safety are jointly investigating the accident.
.
Posted by The Man at 5/20/2009

Well, I just decided what I didn't want for dinner tonight...

Germany must not have standard lock-out-tag-out policies? Confined space entry procedures?
I thought some of our US regulations were crazy, but this is a tragic and avoidable death.

Lack of safety devices causes this tragedy no doubt.