These pictures bring a new meaning to doing a dump run

David Jones said he was dumbfounded and had to get his camera out to take photos when he noticed the Holden Commodore towing a trash bin as it overtook his vehicle on the Stuart Highway, south of Katherine on Wednesday.
"We thought it was hilarious," he said.
"It was an 80kmh zone and she just flew past us.
But then the bin started to wobble and lost a tire. 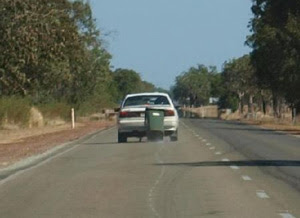 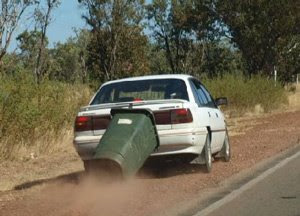 "It was dragging along for ages and left marks all over the road.
There were bits of rubbish flying everywhere.
"She then obviously realized something was wrong and pulled over."
Mr Jones, 32, a former Territorian who moved to Sydney last year, was on a road trip with friends to Darwin when they saw the trash bin fiasco.
"Who knows what she was doing, maybe it was a prank," he said.
"We had only passed a rubbish dump sign moments earlier."
He said it is definitely one of those unique things that would only be seen in the Territory.
.
Posted by The Man at 6/23/2009