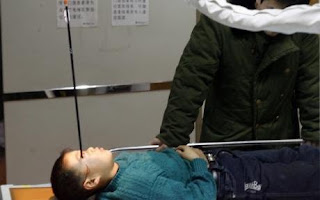 A schoolboy archer had a narrow escape after being shot through the eye by a friend.
The arrow went through 11-year-old sharp shooter Liu Cheong's eye socket, completely through his head and was only stopped by the back of his skull.
"If the arrow had been shot with just a bit more force, it would have come out the back of his head," said doctors at Jida Hospital in Changchun, eastern China.
The boy only survived because the arrow had miraculously missed his brain.

Whoa, so now he can only see through his left eye?