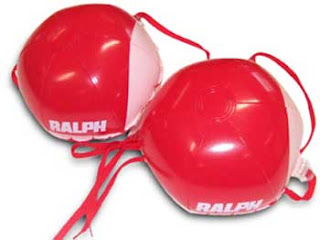 Lost in transportation the inflatable breasts have turned up just in time for the next edition.
The inflatable breasts intended for an Australian men's magazine promotion have turned up in Melbourne. The shipment of plastic boobs from China had been missing for more than a week after Chinese officials lost the paperwork and put them on the wrong boat, a Ralph magazine spokeswoman said. They had been due to dock in Sydney last week, but have since turned up at a Melbourne dock, where they've been sitting for a week. Workers are now frantically working to put them in bags to go out with the December 15 issue.
The magazine is expected to break the Guinness world record for the most boobs given away at one time.
.
If these are what they given away they should have been lost at sea.
Posted by The Man at 12/11/2008