Mistake could have had serious consequences 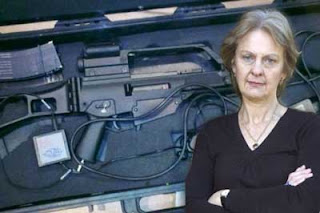 Catherine Roots had been expecting a horse harness in the post, instead she opened her package to find a Heckler & Koch black submachine gun.
The package was delivered by a courier to Mrs Roots when it should have been sent to firearms officers at the nearby police headquarters.
She called the station and two armed officers turned up and took it away.
Police later explained a gun supply company made a mistake with the postcode when they sent it to Dorset Police in Winfrith near Dorchester.
Instead of writing down DT2 8DZ a clerk put Mrs Roots' postcode of DT2 8DT on the package.
.
Posted by The Man at 12/11/2008