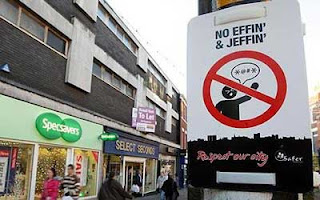 Council chiefs have sworn to stamp out town center swearing in a poster campaign against anti-social behavior.
Zero tolerance for bad language is being spelled out in signs and banners across Preston in Lancashire, laying out "Rules 'Round Town" in slang terms such as "No 'Effin & 'Jeffin". But the phrase will probably baffle even the sober as it is slang used in the USA's Deep South to describe someone who is useless and grumpy at work because they are hung over and appears to have been picked just because it rhymes. Clearer messages are "No Pavement Pizza" which depicts a character being sick in the street and "Don't Pee Anti-Social" which shows someone urinating.
The Respect Our City campaign is designed to reduce swearing, spitting, litter dropping and dog fouling. Police can give out fixed penalty notices of up to £80 while council officers can impose £75 on-the-spot fines for litter.
.
Posted by The Man at 12/11/2008